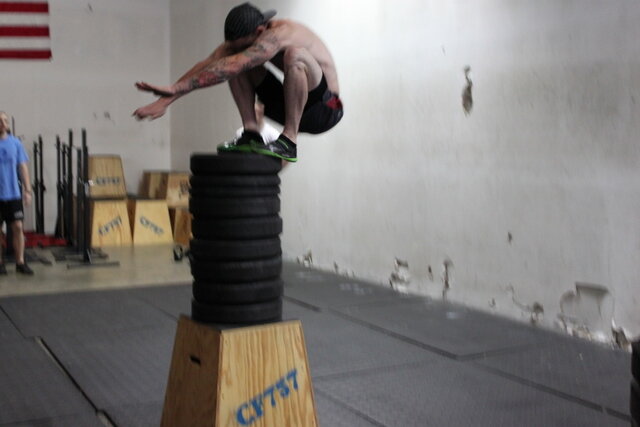 In the world of strength training, dynamic explosive work is often left on the back burner. And I’m still trying to figure out why?

Maybe it’s fear of the unknown. A lot of lifters seem to have no problem stacking on plates and squatting ass to grass, but when it comes to performing jumps or other plyometric exercises, they look like a fish out of water. Literally.

While the general pop labels squats and deadlifts as “bad for your joints”, I think lifters and strength athletes tend to have a similar outlook on dynamic work.

All of the main lifts (squat, bench, deadlift) have one thing in common: your feet are rooted to the floor. Anything that requires you to be airborne is out of the realms of possibility. At least, that’s what some lifters think.

But what these lifters fail to understand is that, when performed optimally and incorporated strategically into your programming, dynamic work will not only not interfere with your strength, it will improve your lifts tenfold.

What’s more, dynamic work is one of the most effective ways to retain your strength and power output with limited access to equipment.

This box jump variation closely mimics the mechanics of the box squat. As your muscles are stretched during the eccentric phase (in this case, lowering yourself to the box), passive tension is created and your ability to generate force increases due to the stretch reflex.

Try a few of these right before your heavy box squats and watch how fast the bar moves.

Your ability to generate force from a dead stop translates directly to your strength in the weight room and your athletic performance. A deadlift starts from, you guessed it, a dead stop. Similarly, you don’t “eccentrically load” your shoulder and wind up for a punch. Whether you’re pulling a heavy deadlift from the floor or landing a 1-2 combination in the ring, you need the ability to apply maximal force without eccentric loading.

I have to give credit where credit is due and shoutout Joe DeFranco for this beauty. He was talking about training strategies for improving explosiveness and power, particularly within the realms of sprinting, on his Industrial Strength Show podcast.

He described it as one of those exercises you do once and almost instantly feel the benefits, and he was right.

The fast contractions between eccentric and concentric phases coupled with accommodating resistance will make your jumping and sprinting ability skyrocket.

Other than just looking pretty neat, this split squat variation has direct implications on your sprinting mechanics and overall explosiveness in the stride position.

Explosive and dynamic movements improve power and strength output without need for much equipment. Use them sparingly throughout your training and reap the rewards.

Join the Insider and gain access to premium workouts, programs, exercises, and my members-only forum.