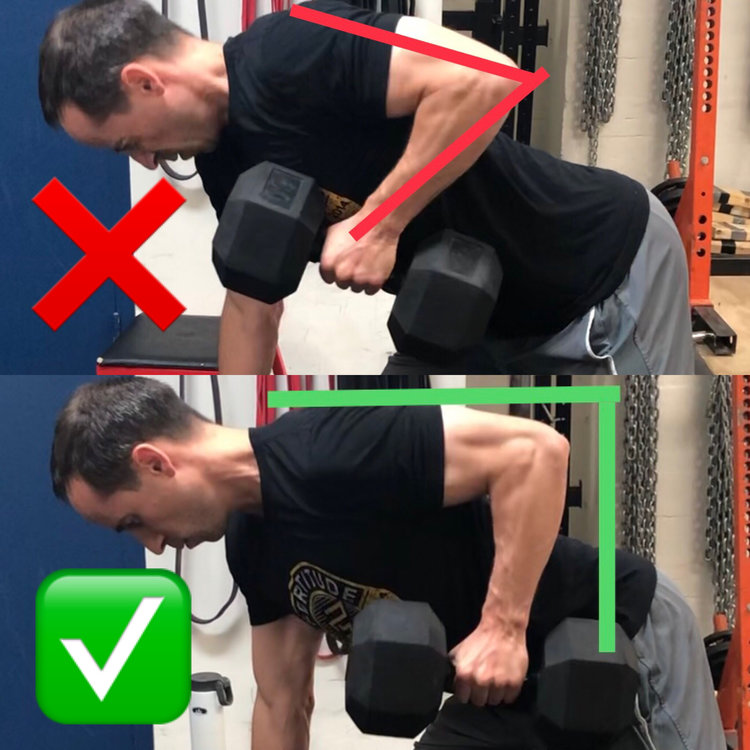 How to Feel Your Back Muscles During Rows and Pulldowns

As cliche as it sounds, there is something to be said about the “mind-muscle connection”.

Certain exercises you do in the gym are meant to target certain muscle groups. Depending on which exercise you’re performing, there is going to be a different response in the body. For example, “pulling” and “rowing” exercises, where you are bringing the load in towards your body, primarily recruits the muscles of the back. The problem is, a lot of people perform these exercises and don’t feel it in their back at all. 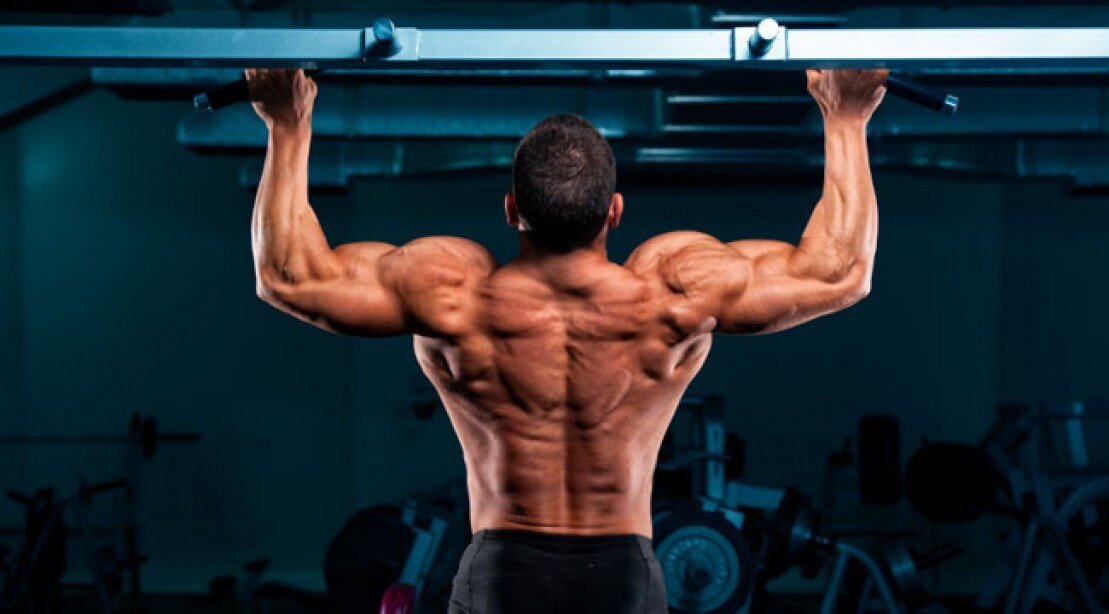 Well, there may be a few reasons. The biggest contributing factor to this may be that they haven’t developed that mind-muscle connection. 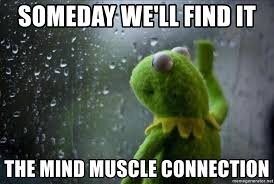 What is the mind-muscle connection?

It’s very simple. It’s when your brain is able to communicate with your body and tell it which muscles to use during certain movements. So, for instance, during rowing and pulling exercises, you want to be able to tell your back muscles to do the majority of the work.

So why do so many people have trouble engaging their back muscles during pulling/rowing exercises? It may be one, or a few, of the following reasons.

There are two main ways you can perform rowing/pulling exercises:

Each of these movement variations have their own benefits and recruit a combination of different muscle groups. In order to get the most out of these exercises, there are some cues you can use while performing them to help develop a stronger mind-muscle connection so you can feel your back muscles engaging.

No matter which way you slice it, whether it’s lat pulldown or a bent over row, you want to take your arms out of the equation as much as possible. Why? Your back muscles are bigger, so if you teach your body how to use the bigger muscles, you’ll be stronger.

Here are some cues to consider the next time you’re training your back.

1. Pretend Your Hands Are Hooks

You’ll obviously need to have a good grip on whatever handle you’re using (whether it’s a barbell, dumbbell, or pull-up bar), so don’t think this means to have a loosey-goosey grip. Rather, just grip the handle and pretend your hands are just hooks attached to the bar. Instead of thinking of “pulling with your arms”, you are going to…

2. Pull With Your Elbows

Personally, this is the one that really made it click. When performing any pulling/rowing exercise, initiate the pull with your elbows. By pulling with the elbows, you’re engaging the major “pulling muscles” of the posterior chain (back). This will basically eliminate any overuse of the arms.

By retracting your scapula (shoulder blade) before you start the actual pulling motion of the exercise, you’re setting your shoulders in place, which will allow you to pull with your back muscles more effectively.

For example, let’s take the bent over dumbbell row. In your ideal set-up, you want to start with your arm completely hanging, with your shoulder blade pulled down towards the floor. From there, while keeping your arm locked, you want to pull the shoulder blade back so it’s set in place (i.e. retracting the scapula). After the shoulder is set in an optimal position, initiate the row by pulling with your elbow. Breaking down the dumbbell row into two separate motions like this forces you is an effective way to stop you from turning too much with the torso and using momentum to get the dumbbell up.

The same principle would apply to pull-ups and lat pulldowns. You want to ideally start with your arms at a dead hang, with your shoulders being “pulled up” towards the ceiling. From there, pull your shoulders back and down, then perform the pull by leading with your elbows. By retracting your shoulder blades before you perform a lat pulldown or chin-up variation, you’re able to use your lats more effectively (the big muscles that make the “V” shape everyone’s going for). If not, you’ll end up overusing the arms and upper traps.

During rows, it’s common to just let the arms drop back down towards the floor before yanking the dumbbell back up. You’ll also see a lot of people letting their arms fly back up during every rep of the lat pulldown.

To get the most out of these exercises and really feel your back muscles engage, you should slow your tempo down during the eccentric portion of the exercise. So when you row a dumbbell or a barbell up, really control the weight as you’re lowering it for a 3-4 sec count. When you let your arms straighten out during the lat pulldown, control the weight and don’t let it control you.

Remember, you are stronger during the eccentric phase, so you will be able to handle more resistance meaning you can slow it down while maintaining good form.

5. Pretend You Have An Orange Under Each Armpit and Make Orange Juice (for overhead pulling exercises)

I don’t have much to elaborate on this one, I just find it really fucking useful. Taken from Jordan Syatt, thanks man!

6. Pull Back Towards Your Hip (for bent over dumbbell rows)

A very common issue during bent over dumbbell rows is pulling towards the ribs as opposed to the hip. In this case, there is too much arm involvement (you’re pulling with the biceps and forearms instead of your back muscles). Rather, pull the dumbbell back towards the hip in a “scooping” motion so your arm lands at almost a perfect 90 degree angle. This keeps the lats engaged throughout the entire range of motion and eliminates any overuse of the arms and upper traps. 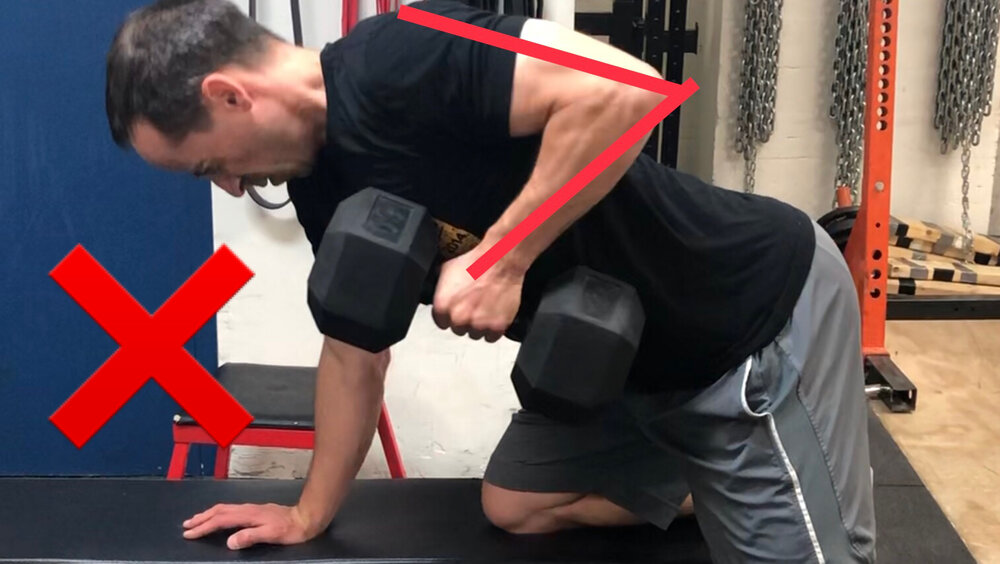 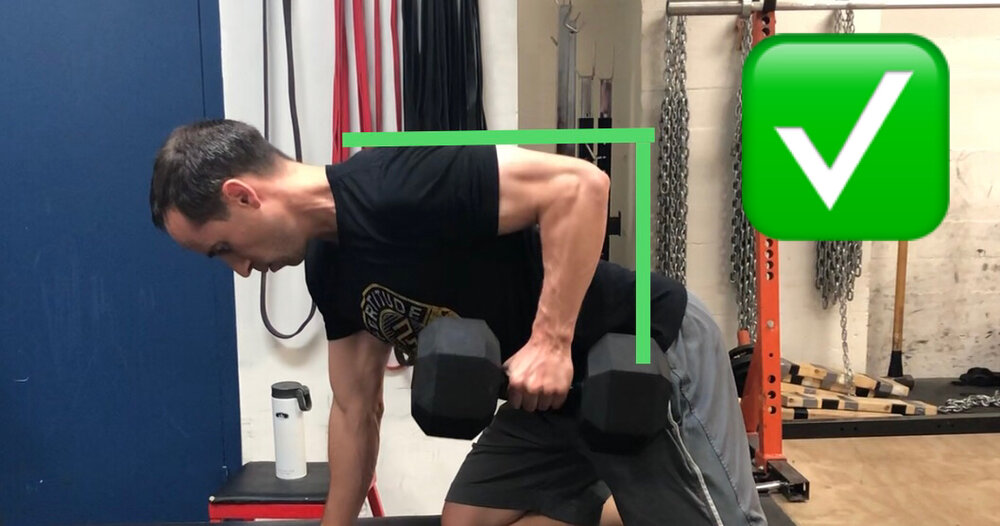